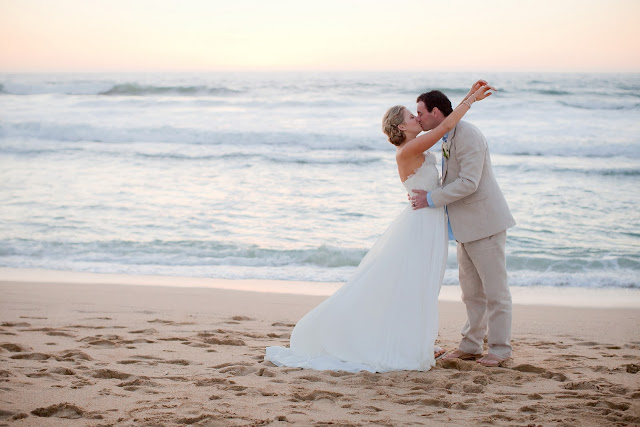 Who is TDH?
I keep mentioning this mystery man in my life.  On the blog I refer to him as TDH but at home he’s my Tall, Dark and Handsome husband.  We recently returned from celebrating our one year anniversary in Half Moon Bay.  We stayed at the same hotel where we danced all night with friends and family.  We walked on the beach where we took our vows barefoot.  And we met up with friends for dinner overlooking our wedding site.  It felt like a second honeymoon!  This blog was just something on my goal list when we said “I do” so I thought it would be appropriate to tell our little story now.
It all started in high school . . . cheesy I know, but it’s not what you think!  Keep reading.
February 2001 – Our best friends set us up on a blind date for a Valentines Day dance.  A blind date in high school?  Yes, TDH attended the all boys school while I was at the co-ed school.  We had never met before.  When he knocked on my door the conversation went something like this . . .
TDH – Hi, I’m Jesse.
(My) Dad – Do you like your kneecaps?
TDH – They’re kind of scrawny but I guess.
Dad – Well, if you want to keep them that way you’ll have her home on time.
TDH – Right, yes sir.
I wore a long bright red strappy dress (and a choker, don’t laugh it was 2001).  When “Lady in Red” came on TDH didn’t stand a chance.  He still talks about that song.  We hit it off, I couldn’t stop thinking about his crazy head of curls and big smile.  He was also taller than me, an anomaly, at 5’10”.  We dated – movies, sneaking out, making each other mix cds, and competing for who could wear the brightest clothes – for about 2 months.  For Valentine’s day I made him a big red card covered with Sweetheart candy hearts, signing off with a “Will you marry me?”  They say when you know, you know.  But, I was about to head off to UCLA and the big wide world of Los Angeles and division 1 volleyball awaited me.  TDH is 9 months younger than me and I didn’t want a boyfriend in high school.  Being the immature 18 year old (she still surfaces from time to time) I just stopped calling him.  I used to be one of those bitchy girls who rarely thought about how her actions affected others.  (Don’t worry I had my heart stomped on eventually.  For those of you there currently, it passes, you will eventually laugh at your heartbreak because the person you end up with will kiss the ground you walk on).
Fast forward 6 years:
– UCLA, Los Angeles for 4, Parsons, New York City for 2 (Marissa)
– UCSD, San Diego, for 6 (Jesse)
I moved back to Los Angeles post grad school for a job in Santa Monica.  Within 2 weeks I am sent down to San Diego for work and I facebook (naturally) TDH if I can stay at his place.  We stay up all night talking, really talking, genuinely curious how each other have been for the last 6 years.  He asked me to marry him that night, I called his bluff and said, “Let’s go to Vegas right now and say I do in a little chapel.”  He backed down.  The next morning as I was standing at the stove making him banana pancakes he asked me to be his girlfriend.  Shocked yet happy I replied with a drawn out “yesssssss”.  We dated long distance for about a year, driving back and forth between San Diego and LA, wincing every time we filled up on $5.00 a gallon for gas.  A year later TDH moved in with me in Los Angeles.  A year after that he took me up to Santa Cruz, CA for a weekend away.  Along a morning hike at Wilder Ranch State Park I snapped away photos as he nervously hurried me along.  The path winds in and out with jagged cliffs providing breathtaking views overlooking the ocean.  Enthralled in a photo TDH has to get my attention, “Mariss, what does that sign say down there?” I peer over the side of the cliff and break into a huge smile.  A 3’x9’ bright yellow sign on the beach reads “WILL YOU MARRY ME?”  TDH drops to one knee and pulls out a box he somehow hid in his bright green lululemon shorts.  He holds out the ring and asks me to marry him.  I don’t answer, I simply swipe the ring from his hand and slip it on my finger admiring the custom Azature piece I designed in the sunlight.  Still down on his knees TDH has to ask me again, “will you marry me?”  I say yes and give him a huge hug and kiss!  We spent the next hour sipping champagne and celebrating on the beach with his brother who set up a little picnic.

One year later, our close friend Jeff married us, barefoot in the sand, surrounded by 200 family and friends.  The weather was insanely perfect, 80* and clear in Half Moon Bay is unheard of.  Our first dance was to “What About Love” by Heart.  We served banana nutella crepes instead of the traditional wedding cake for dessert.  I was able to dance all night in a short sparkly dress.

One day we hope to live in a beach shack on St Barths but for now we are living happily in La Jolla with two French bulldogs and two chickens.  I can’t imagine what my life would be like if TDH hadn’t given me a second chance.  I’m a lucky girl.